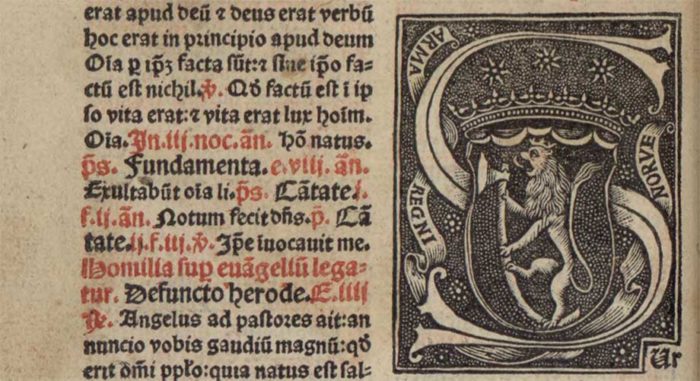 The aim of the project Digital corpus and dictionary of Norwegian Medieval Latin is to make a digital dictionary of medieval Latin in Norway, including papal letters concerning Norway and diplomatic correspondence with foreign states. The main bulk is documentary and legal material. A digital corpus of texts that form the base for a concordance has been established. Together the corpus and the dictionary will provide a tool for editors of critical editions of Medieval Latin texts, as well as for philologists, linguists and historians.

Read more about the project

Although Latin gradually fell out of use as a mother tongue after the fall of the Roman empire in the west in the fifth century, it still remained a vibrant and dynamic language in most of Europe throughout the medieval period. First of all, it was the language of the Catholic Church, whose influence over both religious and profane matters cannot be overstated. Furthermore, Latin was the language of administration, law, and scholarship, as well as the lingua franca of diplomatic exchange between nations.

Being used over such a vast area and such a long period, the Latin language naturally underwent various changes, and a Latin speaker from ancient Rome would have had trouble understanding many Latin texts from the Middle Ages. Finally, the Renaissance, with its profound shift in values and worldview and its concomitant rejection of all things medieval, put a stop to the further development of Latin as a living language. The different vernacular languages gradually took over the position that had been held by Latin, and where Latin was still in use, medievalisms were condemned as being degenerate, and classical Latin – the highly stylised literary language of Cicero and Caesar – became the norm and remained so for centuries.

As a consequence, most Latin dictionaries, from the Renaissance until the nineteenth century, have been based chiefly on ancient Latin and, to a considerable extent, ignored later developments. One exception stands out, however: in 1687 Charles du Fresne, sieur Du Cange, published his Glossarium mediae et infimae Latinitatis, a comprehensive dictionary which, with several later revisions (the last in the 1880s), became the standard dictionary of post-classical Latin.

In the course of time, however, Du Cange became outdated and shortly after the First World War Union Académique Internationale, the international organisation of national academies of humanities and social sciences based in Brussels, took a decision to compile a modern dictionary of Medieval Latin to complement Du Cange’s work. This undertaking, in the form of national and regional dictionaries compiled under the aegis of the academies of their respective countries, is still ongoing, and the dictionary of Norwegian medieval Latin is part of this large project1.

In 1920, the Norwegian Academy of Science and Letters initiated the Norwegian Latin dictionary under the direction of Prof. Samson Eitrem. In 1932 Eirik Vandvik joined the project and became one of the driving forces, holding the post as editor from 1949 until his death in 1953, with the assistance of Vegard Skånland, who took on the responsibility for the dictionary in 1957.

As far as we can see, most progress on the dictionary so far occurred under Vandvik and, especially, Skånland, during the years 1949–1953 and later in 1957–1962, when the project received funding from the Norwegian Research Council and was based in Oslo. Upon his retirement as a professor of Medieval Latin in Bergen in 1991, Skånland left behind a useful, if incomplete, outline of the dictionary, as well as a card-index containing a concordance of central Norwegian texts in Latin, mostly from the twelfth century, an index of place names, and a substantial list of errata in several printed editions of the sources used. However, Skånland’s activities seem to have petered out in the 1970s and the project came to a standstill that lasted until his death in 1998. His successor as professor of medieval Latin at the University of Bergen, Lars Boje Mortensen, and from 2007, Aidan Conti, took over the project: an electronic version of Skånland’s outline, 260 pages in A4, was prepared under Mortensen’s direction, references were checked and a concordance was made of important texts2.

In 2014, the project moved from Bergen to Oslo, where it had originally been based. Espen Karlsen (leader, National Library of Norway), Dag Haug (University of Oslo), and Øystein Eek (the publishing house Kunnskapsforlaget, Oslo) were appointed to a new committee. It was clear that fulltime employment of at least one lexicographer with a doctorate was a prerequisite for progress. The following year, the Norwegian Research Council responded positively to a joint application from the Norwegian Academy of Science and Letters, the National Library of Norway and Kunnskapsforlaget, Norway’s principal publisher of dictionaries (which is now part of Gyldendal). The funding, which included resources for one, and later two, full-time lexicographers, was granted in 2015, and the following year the present project could begin.

1For more information about the European project and a list of already (wholly or partially) published national dictionaries, see http://www.uai-iua.org/fr/projects/5/dictionnaires-du-latin-medieval )